Oblivious pedestrians can avoid Darwin’s Law more readily now that mass market automakers Ford and Honda are rolling out pedestrian detection and braking systems. The automakers combine radars and cameras that helps the car ID the culprits, warn the driver, and usually brake in time. They join Lexus, Mercedes-Benz, Subaru and Volvo who have jointly taken the lead on these pedestrian safety features.

Most systems work splendidly at 10 mph or below (just not on Lexus’ first pass through theConsumer Reports test track), and most of the time up to 20 mph (32 kph). As speeds approach 30 mph (48 kph), the time to detect grows short, but at least they’ll scrub off speed. (Better to be hit at 5 mph than 25 mph.) 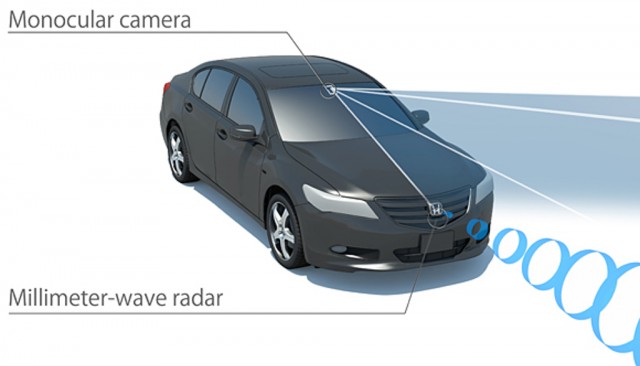 The Ford system is called Pre-Collision Assist with Pedestrian Detection. It combines radar and optical (camera) technology. As with most other systems, the same sensors also warn of rapidly decreasing distance from the car in front, then brake to avoid a crash, or reduce the force.

It debuts first later this year on the 2015 Ford Mondeo. In the US, that’s the Ford Fusion (our Editors’ Choice for midsize hybrids, but there is a gas version too), and the Lincoln MKZ. As for the US, Ford said in its release, “It will then roll out to other Ford and Lincoln products around the world.”

Honda says it’s bringing out a system a system to deal safely with pedestrians and close-ahead vehicles, under the umbrella term Honda Sensing. The pedestrian safety component is called Pedestrian Collision Mitigation Steering System. A millimeter wave radar in the grille and a monocular video camera in the windshield sense pedestrians in front and alongside the road. In the case of roadside pedestrians too close for comfort, the car will veer away from the pedestrian, apparently after making sure there’s no oncoming car. Honda says that will be on the Honda Legend, sold here as the Acura RLX, the largest Acura sedan (RLX, TLX, ILX).

The just-shipped 2015 Acura TLX collision mitigation braking system uses the same radar and camera duo to brake for pedestrians but apparently not steer away from them.

While radar sees fine in the dark and optical cameras work passably well as close distance after dark, automakers such as BMW and Mercedes-Benz are championing infrared night vision systems that produce an infrared view of the road ahead mapped to heat emitted by objects. Algorithms similar to the radar/camera pedestrian detection systems identify humans on foot, cyclists, and large animals, and prevent the view on the instrument panel or center stack LCD. Current systems highlight people and animals and sound an alert. Cadillac and Lexus also offer night vision.

The BMW / Mercedes systems have the ability to disengage one of their steerable multi-beam headlamp array units, aim it at the pedestrian’s feet, and flash it three times. It also can shine a light on deer and other large animals. In the US, the units are dumbed down to deal with US safety standards

Error: (#10) To use "Page Public Content Access", your use of this endpoint must be reviewed and approved by Facebook.
Solution: See here for how to solve this error